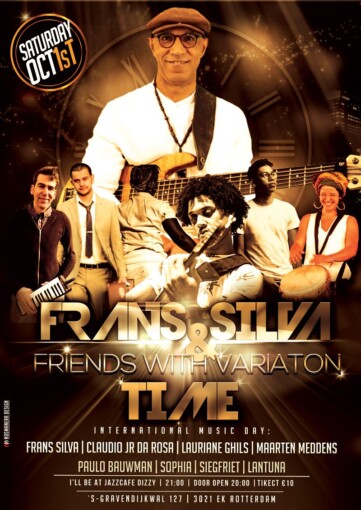 Frans Silva is an energetic, creative mind with Cape Verdean roots who can express his qualities as the best when it comes to music. He is a well-respected musician in The Netherlands and Cabo Verde. Participating in very popular Cape Verdean bands and events like: Koladance, Rabelados and the National Orchestra of Cabo Verde made him well known in various countries such as the U.S., The Netherlands, Portugal and Cabo Verde. He has always occupied himself with Cape Verdean music, until he came in contact with the Jazz world.

He achieved a special achievement by graduating from the conservatory in Amsterdam and Utrecht as a bass player in 4 different genres: Jazz, Latin Jazz, Pop and World Music. This made him the 2nd Cape Verdean in the Netherlands who graduated from the conservatory. Because of his broad experience in both music worlds, he wanted to create something new, and is currently working hard to realize this ambition. He has already launched a project called “Variação D’Temp” which means “variation in time” translated into English. Through a fusion between Cape Verdean folklore and Jazz, he brings a new and refreshing sound to both worlds